And It Rained That Night

This post is a part of Write Over the Weekend, an initiative for Indian Bloggers by BlogAdda. 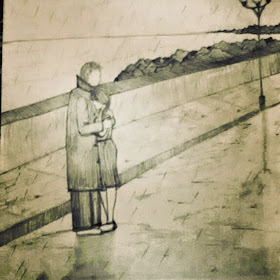 It was gloomy outside. Grey clouds stagnant overhead though it was surprisingly and reasonably windy.

It had been a month since it had rained. It seemed that the ashen clouds were playing a merciless game of tease with the gullible and cautiously hopeful people everywhere.

Inside one of the edifices on the edge of a sleepy town on this dreary day were holed up two people. Two unfortunate people.

"What about this? Is this important?" she asked looking at the worn out title of a dusty old book as she held it out.

"It could be," he said from the far corner of the room.

Their eyes met as he walked towards her.

He took the book from her hands deliberately grazing the pad of his thumb against the exposed part of her palm that held it.

She looked up at him for a millisecond before resuming scouring through the pile of books in front of her.

She shifted and straightened her back as she felt him sit beside her.

There he sat in that cramped up space amidst the old books close to her.

Too close, she thought.

"Have you looked through all the volumes there?" she asked hoping to get him back in the other corner of the room.

"Yes," he said breathing an adamant sigh as he revelled at being perched beside her.

She tried to ignore the undercurrent vibes his curt replies carried as she busied herself with other books. She turned herself so she now sat with her back against him. It was better because she didn't have to look into his eyes now.

If she gazed into them too long then she would be in trouble.

A few minutes later she remembered something crucial to their search as she flipped the pages of a book in her lap. Her eyes still focused on that page, her other hand reached out beside her, fumbling for a book she had just perused.

In one of those unbelievable stroke of coincidences her hand fell on his as they reached out for the same book.

At the same time.

Their fingers intertwined for a few meagre seconds before she jerked her hand back.

"Why do you do that?" he asked  dropping his voice to almost a whisper.

"What?" she feigned ignorance.

"Whenever I look at you, you look away, whenever our hands brush you... It's as if you don't... When you know that there is something... Between us," his words flowed in a rush as if a carefully built dam broke.

Still her back to him she hung her head low thinking of something to say.

He had given up hope of getting a response from her when she spoke slowly.

"Why do you keep on doing it then? Pushing me. Deliberately?"

"Because I know that you know. And I know that you like it," he said as he ran his fingers through her long hair, touching the tips of the strands that curled at the base, ever so slowly.

"You intrigue me," he breathed.

"And that scares me," she uttered as her heart fluttered at his touch.

"Why?" his hand stopped.

"Because people are only interested in intriguing things as long as it intrigues them. Have you ever seen somebody hold onto a puzzle after they have solved it?" she quizzed him.

"What if someone never thought of them as a puzzle in the first place? What if it was always more than that?" he answered.

"There is something. Amidst us. Around us. It envelopes us. I know it. I see it," he said.

"I know. I feel it too. It is so strong and potent. Like a scent that refuses to wear off," she said.
"But we do nothing," she continued.

At this he fell silent.

"The thing is - we both are quite the same. You are just as twisted as I am. I am just as broken as you are," she propounded.

"How does that help?" he asked, now touching her arm coaxing her to turn around.

"It is an endless cycle of pain. We try to fool ourselves into thinking that we can be happy. But we won't. Pretty soon we would be just like any other two people out there. Keeping secrets. Hiding. The lies. Worse. It would be like holding our breaths to see which one of us falls first. Which one of us hurts the other first," her voice trailed as she got lost in his eyes.

He raised his hand to touch her cheek.

"I've seen it too. You're not the only one who has you know. I am a sceptic just like you waiting to be proved wrong. We all are," he said as his thumb caresses her lips.

"It is inevitable," he said.

She saw the shadows underneath his eyes and the years of gloom that they hid.

She wished she could kiss them away.

"I would be in a lot of trouble if I act on my impulses," she said, her voice barely a whisper now as she felt the lascivious warmth that penetrated her where his fingers came in contact with her skin.

"We both would be in a lot of trouble," he said as his eyes burned an unknown color. She would never forget their intensity for as long as she was alive.

And just like that the place where his fingers were became vacant. Leaving a void. A cold draft touched her face bringing her back to reality. The warmth was no more.

His fingers ached at the loss of contact. He ached to feel her skin again. He dove into the pile of books once more.

That evening, the heavens above saw two people coming back from a sleepy old town. Quite on the outside. Tattered from within. Not speaking a word to each other they resumed their respective paths.

And it rained that night.