At The Stroke of Midnight

This post is a part of Write Over the Weekend, an initiative for Indian Bloggers by BlogAdda. 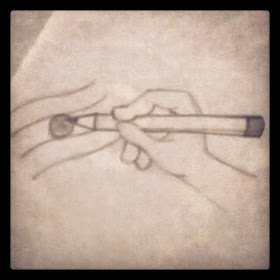 Somewhere between the overly sensationalised bytes of the newsreader and the innumerable tv commercials, I fell asleep. I was so tired I couldn't muster up the strength to drag myself to my bed as the first faint whisperings of my deep slumber started making their presence felt. So I dozed off on the couch with the TV still on and it's low sounds stirring me from my repose occasionally.

This was more than that. That sound roused me from my slumber like a mother does when waking her child. At first I couldn't comprehend it and my half asleep state prevented it further.

A few seconds later I realized that my house was echoing with a woman's sobs. I got up with a start. Grabbing my cell phone off the table in front of me I checked the time.

I froze as it hit me that the sobbing sounds were emanating not too far from me. A spot on the wall right in front of me seemed to be the source. On rubbing my eyes a few times I could see a woman sitting there. She wasn't entirely visible to me in the dim light that glowed from the night lamp beside the couch.

I could make out a woman who may have been in her sixties, the luminance of her long white sari, her dark hair flowing endlessly to the ground where I assumed her feet would be.

It was something about her. Or the way she sat in front of me. Or the vibes she radiated. I knew who she was. But I couldn't bring myself to believe it.

"I am her. The spirit of the land you dwell on. The soil on which you lay your forehead in reverence. The embodiment of The Mother who has looked after you. I am India," and those words resounded in the small space of my room, my world.

Her words stifled by her sobs now and then.

"We're free!" I exclaimed in a whisper in a bid to stop her from crying.

"68 years," I sighed still hazy on what I thought I was seeing.

She was silent. I thought she would say something about it. All these years. The era before Independence. The taste of freedom.

As if on cue, my attention diverted to the TV screen where a recent rape case was making headlines. Gruesome details about how the incident took place coloured the ticker space. The news anchor kept badgering the viewer with this sensitive piece of news.

I quickly found the remote and shut it off.
Instinctively, my eyes alighted on the newspaper that lay within my reach that had another rape case headlining its front page wedged between another old case, whose unsatisfactory court ruling had left the public enraged, and a full page size advertisement of a new product launch.
I quickly picked up the newspaper and folded it neatly before placing it under the table.

"You think placing it under the table or switching off the TV will make it go away?" she asked and slowly crept out of the spot where she sat and came towards me.

It was then that I saw her completely.

Her once beautiful face was badly battered. Her lower lip swollen and her right eye tainted by a nasty bruise. Her forehead a zoo of gashes and scabs. The rest of what was visible of her was either bleeding or covered in wounds some healing - some fresh as new. Her sari was tainted by spots of blood everywhere.

I stood up with a gasp.

But my eyes started watering.

And I didn't realise that I was crying until I tasted my own salty tears as they made their way to my lips.

And then I remembered the helpless parents. Their faces. The empty holes that their lives remain in the aftermath. Their hopes.

My legs turned to jelly as I pooled on the floor crying. My weak body bent towards her as me head rested on her lap.

And I cried.
Like I had incurred the biggest of losses.

I wailed.
Like I had nowhere to go to.

I howled.
Like it suddenly dawned on me that this was not what India had dreamt of when she became 'free.'

My eyes fluttered open and I realised I had been dreaming. I woke up and searched for her where she had sat but she was nowhere to be found. The only tangible proof was the cushion on the couch that was now soaked in tears.

I looked up at the TV which was still running. It was 12:12 am and the news channels were telecasting the Independence Day specials. Words from Pandit Jawaharlal Nehru's midnight speech were being aired.

"At the stroke of midnight hour, when the world sleeps, India will awake to life and freedom..."
"...We have to build the noble mansion of free India where all her children may dwell."

A fresh bout of tears erupted as I sat on the couch my head hanging low.